British whalers and sealers had been working in the Southern Ocean throughout the 19th Century and two sealers, George Powell (British) and Nathaniel Palmer (American), discovered the South Orkney island group in 1821. Powell named Coronation Island to celebrate the crowning of King George IV.  A few years later, Matthew Brisbane, as part of an expedition led by James Weddell, surveyed the south coast of Coronation Island and noted Signy Island, although he did not name the island.   This was left to the Norwegian whaling captain, Petter Sorlle, who is particularly remembered for inventing stern slipways for factory ships which allowed for whales to be more easily hauled on board for processing.  He named Signy Island after his wife Signy Therese.

The first survey of the island was conducted by Sorlle in 1912-13.  Signy Island was subsequently visited and charted by Discovery Investigations personnel in 1927 and 1933.  Finally, in 1947, the Falkland Islands Dependencies Survey (FIDS) charted the island. The charts produced by these surveys account for many of the names of the island’s features. Others were provided later by the UK Antarctic Place-Names Committee.

The Scotia Expedition and Orcadas

A significant event in the exploration of the archipelago was the arrival of the Scottish National Antarctic Expedition (1902-04) led by the oceanographer and experienced polar explorer William Spiers Bruce in his ship, the Scotia.  He had gained knowledge of the region from accompanying a Dundee whalers expedition several years earlier.  The Scotia expedition used the South Orkneys (and specifically Laurie Island) as a base from which to undertake marine research in the Weddell Sea and to provide an anchorage to overwinter the ship.

Not everyone was taken with the landscape and environment of the South Orkney Islands.  An officer on the Scotia, one J. Ritchie, always insisted that “the only real use for the South Orkneys’ would be as a penal settlement.  For that purpose they were almost ideal.  In summer the convicts would be employed in house building and in winter he would keep them busy shovelling snow off the glaciers.”  This perhaps anticipated the appearance in a Signy Midwinter magazine of a quotation from Orson Welles poem “The Ballad of Reading Goal” (reported by David Wynn-Williams in BASC Magazine 15)

“I know not whether Laws be wrong or Laws be right
All we know, who lie in gaol, is that the wall is strong
And that each day is like a year, a year whose days are long”

Bruce established a land station on a shallow beach in in Uruguay Cove on Laurie Island and several buildings, including Omond House (named after Scottish meteorologist Robert T Omond, a strong supporter of the idea of making meteorological observations in Antarctica) were constructed.  The House was built with over 100 tonnes of stone manually quarried then hauled on sledges from an adjacent glacial moraine. Its main purposes were to serve as a base for meteorological observations made at the nearby weather station, and as living quarters for small parties left behind when the Scotia returned to Buenos Aires for repairs and supplies.

Meteorological observations were made at the station throughout the expedition and these were continued by the Argentinians who were presented with the station by Bruce after his offer of the site to the British Government was turned down. This meteorological record has been maintained to the present day and is Antarctica’s longest such record.  The station was renamed Orcadas and whilst it has gone through several rebuilds it remains the longest continually manned station in Antarctica.

Although the Scotia expedition did not receive the official or public recognition accorded to the Scott and Shackelton expeditions it has been recognised more latterly as the most efficient research programme undertaken in Antarctica at that time.

For those looking for more details of the Scotia expedition:

Two detailed accounts marking the centenary of William Spiers Bruce and the Scotia expedition have also been published:

The Early History of Signy Island – Whaling and Operation Tabarin

The first charts of the South Orkney Islands do not show Signy Island. It must have been hidden in the mank! The island was effectively put on the map by the whalers who operated in these waters in the late 19th century.  Their first documented visit to the island was in 1907-08 when the Newfoundland Whaling Company deployed a floating factory there. It was not a success as the ice conditions were particularly bad.  However, floating factories visited the South Orkneys annually until 1914-15 and over 2000 whales were taken.  In 1913 the whaling ship “Tioga” under Captain Moe sought shelter on the exposed west coast of Signy Island but she was blown ashore and wrecked.  The wreck was explored many times by Signy Fids whilst there was a diving facility on the island.  A porthole from the Tioga graced the wintering Signy Station bar for decades.

The wreck of “Tioga”, which was driven ashore on the
west coast of Signy Island in a gale in 1913.

Whaling resumed after the First World War and a licence was granted to Tønsberg Hvalfangeri to establish a shore whaling station at Factory Cove. This station operated for four years, principally processing “skrotts” (the carcasses rejected by floating factories after the blubber had been stripped) but it ceased to operate in 1925-26. Paal Harbour was also used as an anchorage, but the great advantage of Borge Bay was the near-by lakes as a source of fresh water.  Processing whale carcasses required plentiful steam and the pumphouse and pipeline established at Lake 6 (now Pumphouse Lake) in Three Lakes Valley assured a good supply.  Some Fids may recall that there was also whalers pipework on the west coast which extracted water from the large stream (close to Tioga Lake)  flowing off Snow Hills and into Pipe Cove.   Floating factories continued to operate in Borge Bay until 1929. 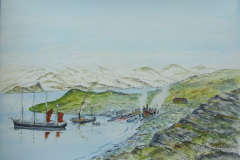 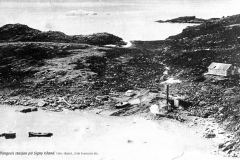 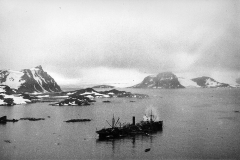 Centre: Factory Cove photographed in 1920. A chimney can be seen by the boilers at the shore and a bunk house, which was never completed, is further up the Back Slope.

Right – The floating factory ship ‘Orwell’ in Borge Bay in about 1928.

Søren Berntsen (him of the Point) is better known as being the manager of Husvik Whaling Station when Shackleton visited South Georgia. As manager of the factory ship Orwell, he made a film at Signy which shows, fleetingly, a fur seal, the first record since the activities of the 19th century sealers had virtually wiped out these seals in the Southern Ocean.

Early in World War II, despite all that was happening elsewhere, the British Government was concerned about the South. There was the possibility of Japan invading the Falkland Islands via the Drake Passage, the successes of German commerce raiders against Allied shipping in the Southern Ocean and the new claims by Argentina and Chile over territories that overlapped those of the Falkland Islands Dependencies.

In 1943, as part of what became Operation Tabarin, the Armed Merchant Cruiser (converted cruise liner) HMS Carnarvon Castle was sent South to search for evidence of German naval raiders, remove signs of Argentine possession and substitute British ones. After visiting Deception Island in the South Shetland Islands, she visited Signy Island (see pictures below) and then made a courtesy call to the Argentines at Orcadas Station. 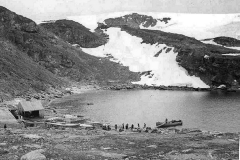 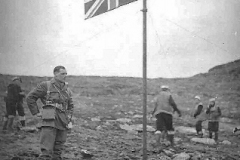 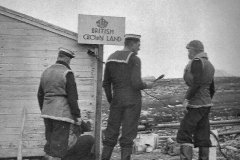 L-R: Visit of the Caernavon Castle crew to Signy Island in 1943; The Union Jack raised on the Back Slope near the abandoned whaling station; Inspecting the Pumping Station and pipeline at Pumphouse Lake 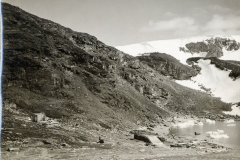 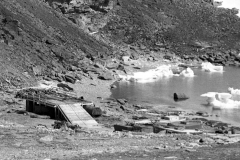 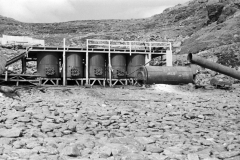 L-R: View of the abandoned whaling station in Factory Cove in 1950’s; Remains of the processing factory and abandoned workboats; Detail view of the factory boilers.

Click on the links below to get to a relevant page or use the pull down menu under the Stories tab.