The Short-lived Base C

The original intention of the British had been to establish a station in the South Orkney Islands on Signy Island in 1944, but this was not achieved. The following year they returned and a hut was built at Sandefjord Bay, at the west end of Coronation Island, and designated Base C, although there were insufficient personnel to occupy it at the time.  A Lt. Victor Marchesi was on board the Operation Tabarin vessel William Scoresby in February 1945 when they “erected a hut on Coronation Island in the South Orkney Islands”.  The ship then visited the Argentinian Base of Orcadas on Laurie Island who were anxiously awaiting their own relief ship.  Marchesi reports that “we presented them with a sheep and we consumed their whisky, of which they had plenty but very little food.”

The Sandefjord hut was located near Moreton Point in a very exposed site and plans to develop this as a research base were quickly abandoned.  It was replaced in March 1946 by a new hut  (which took over the Base C designation), and this was located at Cape Geddes ( Ferguslie Peninsula) on Laurie Island.  The Cape Geddes hut was called Cardinell House after the then Governor of the Falkland Islands. 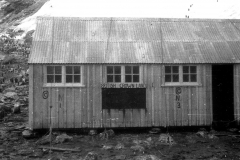 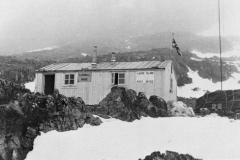 The Sandefjord Hut was last seen intact in 1950 and it had succumbed to gales by 1955.  The Cape Geddes base only operated from January 1946 to March 1947, when it was closed in favour of Base H which was established on Signy Island and later became the Signy Research Station.

Since its closure the Cape Geddes hut has been used as a bird hide and field refuge by Argentinian staff at Orcadas Station.  Following an inspection by the BAS Abandoned Bases team in Mar 2007 it was decided to leave the hut in situ as removing it would cause considerable disturbance to the local wildlife.

Setting up Base H at Signy Island

(Modified from an article published in BAS Club Newsletter 21)

The decision to move us from Cape Geddes (Base C) on Laurie Island in March 1947 was due to James Wordie. Although political factors were then dominant, there is little doubt that Wordie appreciated that base personnel would be much happier and do better research on Signy Island.

Building materials were assembled in Stanley and shipped to Signy in Trepassey where Cdr Bingham and Doc Slessor chose the base site on 10 March and started building the hut, while the Trepassey transferred our party and stores from Cape Geddes. We dropped anchor on the 17 March in Borge Bay. Our stores were unloaded on the beach the next day, leaving us to finish off the building.
[The stores were moved by the four base members from the beach to the hut, a distance of 170 yards, up a 70ft climb. This took four days and Robin later estimated that 2 million foot-pounds of manual labour was done. A tribute to Fid power!] 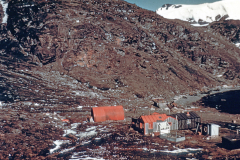 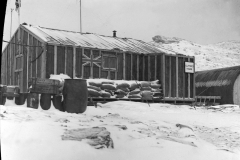 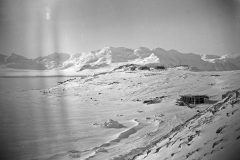 Left: View of Base H from the Anno Tower; Centre: Clifford House; Left: view of whaling station remains and Base H on Bernsten Point

Although the roof and walls were covered with water-proof felt, there was no insulation between the inner and outer walls. Some draughts came up between floorboards during gales, but worse was the condensation. The inner walls of absorbent Essex boarding soaked up condensation and the bottom 18 inches remained wet from April through to high summer. Extra screens of foil and cloth between the lower bunks and walls stopped blankets getting wet. 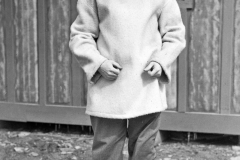 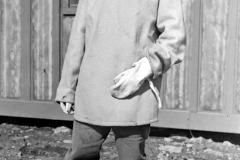 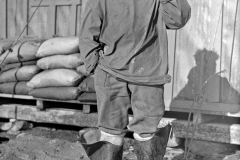 On base were three Falkland Islanders and myself.  Bill Roberts, our excellent radio operator who was later to hastily install communications equipment in the study in Government House on the night before the Argentinians invaded in 1982. Pat Biggs, ex-AB in the Royal Navy, worked in the Falkland Island Company store in Stanley for many years. The youngest, Hugh Anderson, was only 18 years old and later spent many years as a seaman on John Biscoe.

My biggest setback was the non-arrival of the 3-cm radar equipment with which I had intended to study radar-meteorology under polar conditions. I had borrowed the radar set from the Admiralty during the two weeks between my enquiry about FIDS and departure from the UK. The equipment reached Port Stanley in SS Lafonia in due course but did not turn up on Signy Island.

This left one physicist/ex-naval officer and three Falkland Islanders to spend a year showing the flag on Signy Island while taking elementary meteorological observations. However we had a plane table complete with alidade and compass, a clinometer and a surveyor’s aneroid. I therefore spent many pleasant days making a plane table survey of Signy Island. Pat Biggs produced a daily ice report, Hugh Anderson did likewise for birds and we all shared with counting seals.

I had found a big pile of blank synoptic plotting charts in the meteorological stores. Having bought a textbook on meteorology, I decided to tackle the synoptic meteorology of the region. Bill Roberts read thrice daily FICOL and Argentinian met reports whenever he could, and I was able to trace storm development and tracks over the Scotia Sea. This actually led to my first research paper, “Notes on Synoptic Weather Analysis on the Fringe of Antarctica” published in the Meteorological Magazine.

There was, however, a general lack of scientific textbooks and collecting equipment at Base H, so it was difficult to know what we should be doing. As no one had overwintered on Signy Island, and the RRS Discovery surveys in the 1930s had been brief, we had the opportunity to learn new facts about the island. Our sojourn ended with a visit by HMS Snipe with The Falkland islands Governor Sir Miles Clifford on board on 7 February and four days later the old M/V John Biscoe arrived on her first southern season with our reliefs, Dick Laws, Derek Maling and Ralph Lenton. After handing over the base and the post office accounts (Dick still maintains that I was £5 short in the cash box) we set off for an interesting trip around other FIDS bases before returning to England.

I suggested six new place names which were finally approved by the Antarctic Place Names Committee. From May 1945 to the end of the Pacific war I had served in HM Submarine Stygian. I therefore proposed Stygian Peak for the most prominent peak at the north of the island. When this was turned down as a personal rather than an Antarctic connection, I proposed the name Stygian Cove. I made the case that the base was so gloomy and overshadowed by the cliffs of the peak, that Stygian Cove was a suitable descriptive name. 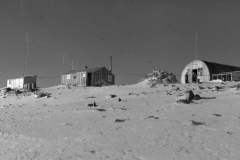 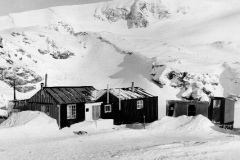 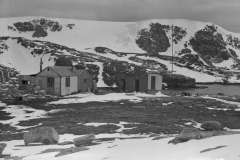 The early Base H in summer and winter

Some extracts from the Concise Account of Signy Island Base H

On 4th April , British Crown Land notices were erected at Knife Point, Waterpipe Beach, and beside the base on Bernsten Point.  Work also began on the erection of the meteorological and generator huts.  These were combined in a lean-to structure with a double wooden wall between them.  Prefabricated double timber sections used for the lean-to came from the whaling station accommodation building and a concrete bed made for the 2.5 kVA Briggs & Stratton generator.

A short description of the old whaling station is given in the 1947 base report.  There were a number of steel and wooden barges, including a 28 foot steam launch (not seaworthy) and the remaining whaling equipment comprised five digesters, a boiler, winches and a tank.  The 1919 two stroke engine at Pumphouse Lake could still be turned by hand and was eventually returned to base for repair.  It was running again in 1966.  Doors, windows and a grindstone from the old station were put to good use and one of the barges used as an emergency food store – a role later taken over by the whalers Explosives Hut near the far end of Bernsten Point. 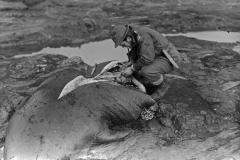 1948 saw the smallest party to winter in the Antarctic since 1922, namely: R.M Laws, D.H. Maling and R.A. Lenton.  In spite of the lack of suitable travelling or surveying equipment, the party managed to carry out a complete elephant seal census at Signy and southern Coronation Island, resurvey Signy and begin a survey of southern Coronation Island as well as adding the laboratory extension to Clifford House. The annual report mentions that condensation in the main hut was a great problem and that the floorboards shrank on drying, which meant that low temperatures were experienced in the hut year round.

Click on the links below to get to a relevant page or use the pull down menu under the Stories tab.